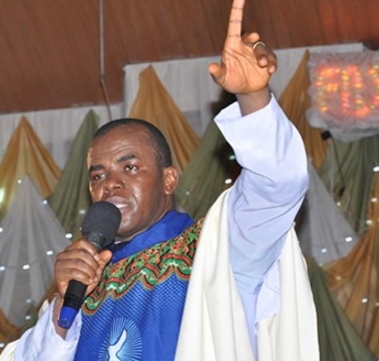 The Christian Association of Nigeria in Imo State, and other leaders have attacked Catholic Priest, Rev. Fr. Ejike Mbaka, over his prophecy that Governor Emeka Ihedioha will lose his seat to Hope Uzodinma. It was reported that the Enugu cleric, who is known for controversial prophecies, in his New Year message, said Senator Hope Uzodimma would be sworn in as governor of Imo State.  He was quoted as saying, “In spite of all that would happen this 2020, there is hope. In Imo State, there is hope. Hope, hope, hope … hope in Imo State!Imo people have suffered (but) God is raising a new hope that would be an agent of salvation for them. He’s coming with a new flag to restore the dignity of that noble land. A new leadership that will break barriers and there would be joy in the land of Imo. Lift your candles as I bless Hope Uzodinma; and I empower him to, spiritually, to take over. How, I do not know. Please, if you heard that there would be a new government in Imo and you don’t like the message; if I say Hope, you can say hopeless but do not fight me. But reacting, CAN leader, Senior Apostle Godson Ibeji, said that Mbaka’s prophecy was politically motivated. According to him he said, “CAN has consistently opposed such politically motivated prophecies and at the same time strives to maintain the standards that guide and regulates the practice of Christianity.” Also the National Youth Council of Nights Imo State chapter, in a statement in Owerri by its state Chairman, Isdore Chukwuemeka, said, We advise Fr. Mbaka to leave Governor Emeka Ihedioha alone. The youths of Imo State are pleased and satisfied with the ‘Rebuild Imo’ administration. Governor Ihedioha is barely seven months in office and has aggressively restored all that the locust had eaten in Imo state in the last eight years.We do not want further distractions of the rebuilding process in the State. Where was Mbaka when Imo State was serially raped for eight years by a clueless administration that mindlessly looted the treasury of the State?”

Trouble for Ohakhim, Okorocha and Ihedioha as Uzodinma issues first order as governor
Leave a comment...
All news