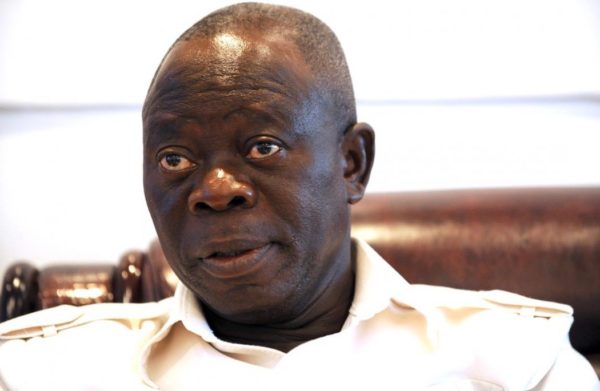 The reinstatement of the national chairman of the All Progressives Congress (APC), Comrade Adams Oshiomhole, has been greeted with mixed feelings by the members of staff at the party’s national secretariat on Monday.

Speaking with newsmen shortly after the judgement was delivered, while some rejoiced over Oshiomhole’s reinstatement, others expressed disappointment. Those celebrating his reinstatement told our correspondent that they cannot wait for his resumption, lamenting that things had been very difficult for them in the past few weeks the acting national secretary, Victor Giadom, and his loyal National Working Committee (NEC) took over the running of affairs at the secretariat. “We are ready to receive Oshiomhole even if he wants to resume today. We have suffered in the past three weeks. We are now borrowing to come to work everyday because nothing is coming from these ones that want to remove Oshiomhole. Nobody is visiting the secretariat since they took over because this place has become a war zone where security agents deployed personnel intimidating even the passersby. The Giadom faction was busy plotting how to remove Oshiomhole without caring about the welfare of the staff. How innocent are even those accusing him? We have married two wives and can now know which one is better,” the pro-Oshiomhole staff insisted. For the ardent anti-Oshiomhole staff, the party will never remain the same with his return to the party, arguing: “We have the feeling that despite what happened to him, he will never change from been the same insensitive chairman, His return will be counter-productive because what is certain is that the party will never be the same again. It will be difficult to forgive those members of the NWC that plotted his removal,” they claimed.

Meanwhile, the acting national secretary, Giadom has said that they will honour the intervention of President Muhammadu Buhari in postponing the planned National Executive Committee (NEC) meeting scheduled for Tuesday. Speaking to newsmen after the decision between the Progressive Governors and President Buhari, Giadom said: “The NEC meeting has been postponed indefinitely, at the appropriately time, the public and members of the NEC will be informed on the new date but as of today, we are in agreement with the president that the NEC meeting has been postponed. I want to put it on record that I never said we will disobey the directive of Mr President to hold a meeting. That is the product of mischief-makers; that did not come from me. Everybody has to respect the intervention of the president,” he said. On whether he is still in charge with the latest ruling from the Appeal Court for the suspension of Oshiomhole, he replied: “I have not been served yet; I am talking to you as the acting national secretary.”

PDP reacts to Supreme Court ruling after Atiku lost his case
Leave a comment...
All news