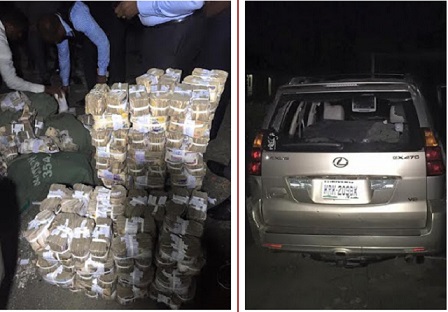 It was a bad day in the office for a gang of armed robbers who stormed a new generation bank located at the Trans-Amadi Layout, Port Harcourt, Rivers State, as they were engaged in a fierce gun battle by a detachment of anti-robbery policemen from the state command, and they had to escape leaving behind their operational vehicle, a Lexus Jeep, one AK 47 rifle, rocket launcher, an English made pistol, six magazines, and a cash totalling N137 million.

To compound their confusion, they also abandoned another of jeep along the Rukpokwu Road when the heat by the pursuing gallant policemen became too much. Three magazine, and 160 rounds of 7.62 live ammunition were recovered in the vehicle. A statement released by the state police, was accompanied by the photograph of the stash of money, vehicle and the weapons abandoned by the fleeing robbers.

Few days ago, the Lagos State Police Command made an uncommon breakthrough when they arrested four members of the deadly armed robbery gang that raided the First City Monument Bank in Lekki Phase 1 on March 12, 2015, where they carted away an unspecified amount of money running into millions of naira, as well as killing five people including policemen and a teenage fish seller, Sarah Ibikunle. The arrested robbers include Duke Odogbo, Lawrence Kingsley, Ebi Tosan and Ekelemo Kuete, and they have been singing in the police cell, telling how the operation was carried out.

One of the four suspects, 38-years-old Duke Odogbo from Warri, Delta State, narrated how the robbery operation was carried out. "I was invited by a friend from Warri, Delta State, to come for bunkering job. But on reaching Lagos, I was told it was a bank robbery. I told them I was into bunkering and not robbery. But because they told me we were going to make much money from it, I decided to join them. On the day of the operation, we left Tarkwa Bay at about 4.30 pm in two boats, with 11 persons on each. But one of the boats developed fault on the way.

We all entered the good one. We got to the bank few minutes after 5p.m. Immediately we left the canal, some of us went to the road and started firing, thereby making way for those of us that would go inside. I led the team that went in.

We were all putting on Army camouflage. I shattered the entrance glass with bullets and when we got inside, we demanded for the money realized for that day. The manager told us they did not make much. But we broke into one of their strong rooms where we got some money.

We also broke into two ATM boxes, but there was no money in either of them. We told ourselves that the operation must not exceed 40 minutes. To my surprise, by the time we were leaving, I discovered that my colleagues were with seven extra rifles. When I asked, they said they saw some policemen in a van, concluded they were there for us and shot at them. I was not the one that shot the policemen. I did not kill anyone. It was when we got to the forest, located in an island in Ikorodu that we discovered that the amount stolen was N15 million and I got N500,000. I used my share to boost my bunkering business.

We never meant to kill anybody. I regretted my action. God cannot forgive me because I don’t think I can ever see the face of the Lord."