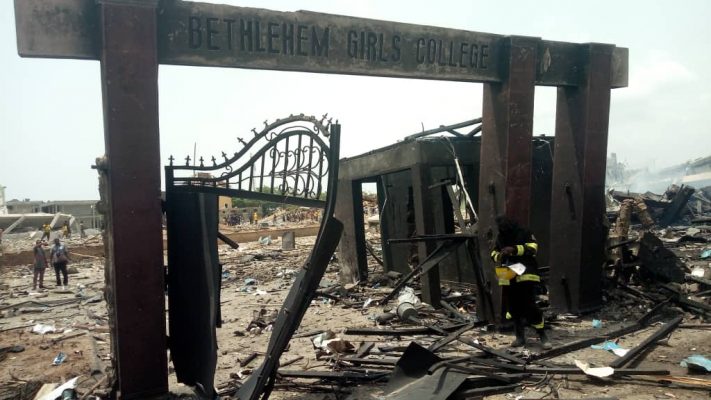 The Catholic Archdiocese of Lagos has clarified that no student of Bethlehem Girls College died in the explosion that rocked the Abule-Ado area of FESTAC in Amuwo Odofin local government area of Lagos state on Sunday. It was earlier reported that many people including a principal, students of a boarding school and family of four lost their lives to the explosion.

According to reports, The Church in a statement signed by the Chief Shepherd of the Archdiocese, Most. Rev. Alfred Adewale Martins, stated that all students of the school were reported safe. He said that with the help of the first respondents, all the students were rescued and some that were injured were rushed to the hospitals while others have been released to their parents and gone to their different homes. We want to state that all students of the school were reported safe. Those who sustained injuries were promptly attended to in various hospitals within the environs. We are getting our Education Department along with the Administrators of other Archdiocesan schools to see how the students of Bethlehem Girls College can be accommodated in other schools so that their education is not disrupted,” the statement reads in part, noting that the incident occurred while the students and staff were at Sunday Mass. The church, however, confirmed the death of the school’s Administrator, Rev. Sr. (Dr.) Henrietta Alokha, and a female security guard who both paid the supreme price while trying to ensure the safety of the students. It also confirmed that no priest died during the incident, explaining that the priest who was celebrating the Mass helped in rescuing the students and himself.

Commenting on the properties destroyed, Rev. Alfred said that the Staff quarters, Administrative Building, the cafeteria and hostel buildings were levelled to the ground as a result of the impact of the explosion with no essential building standing except the convent housing the nuns in charge of the school. The Church thanked all those who responded swiftly, while also commending the Lagos State Emergency Management Agency (LASEMA), Nigeria Emergency Management Agency (NEMA), the Red Cross and the various Security Agencies for their prompt response which, it said, ensured that the situation did not get worse. We are grateful to the Governor of Lagos State, Mr. Babajide Sanwo-Olu for his call to express the sympathy of the government and for setting up a committee to investigate issues surrounding the explosion,” Rev. Alfred said. Meanwhile the Lagos state governor, Babajide Sanwo-Olu, had launched a N2billion Emergency Relief Fund for victims of the explosion. He has also set up an inter-governmental and multi-sectoral committee to investigate the remote and immediate cause of the explosions, which he described as unfortunate and monumental.

Another fuel tanker explosion in Lagos