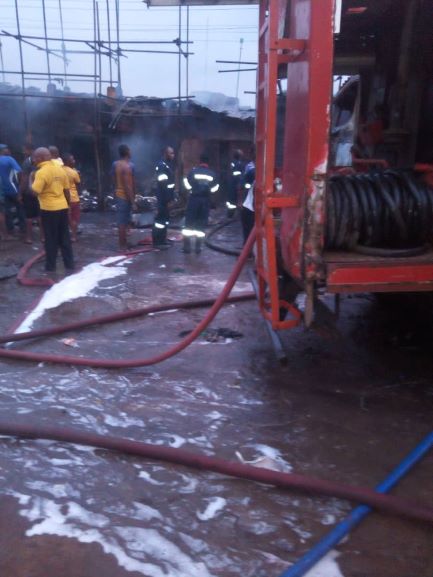 Goods worth millions of naira were on Wednesday morning razed at the building materials market, Ogidi, near Onitsha, in a fire incident that began at about 4am.

It was learnt that the fire started from a vehicle parked inside the market, and stacked with goods, waiting to be offloaded later in the morning. Though sources were unable to identify the nature of the goods contained in the vehicle which could have ignited the fire, it was learnt that an investigation into the cause of the fire has been ordered by the Anambra State commandant of the Nigeria Security and Civil Defence Corps, NSCDC, Mr David Bille, whose personnel rushed to the scene, upon being contacted. The spokesperson of the state command of the NSCDC, Mr Edwin Okadigbo said, “Today, 11/03/2020 at about 04.04hrs the command received a distress call of fire outbreak at Building material market, Ogidi in Idemili North LGA of Anambra State. The command thereafter alerted the State Fire Service led by Engr. Martins Agbili who responded promptly by deploying firefighters and fire trucks from Onitsha and Awka to scene. Men of Idemili North Divisional office led by the Divisional Officer CSC Onwuakagba Stella were mobilised to the scene. ‘Preliminary investigation revealed that the fire outbreak emanated from a standby loaded lorry packed inside the Market, the content or the goods inside the lorry has not been ascertained. There was no loss of life but goods worth thousands of naira were destroyed. Meanwhile the state Commandant NSCDC, David Bille has ordered for a discrete investigation to ascertain the circumstances surrounding the incident. The building materials market in Ogidi is a large market which serves the entire state and Delta, in terms of sourcing building materials, and reputed to harbour several millionaire businessmen.

Just In : Fire guts market inside Mogadishu cantonment in Abuja