2 community leaders detained over killing of 3 herdsmen in Anambra 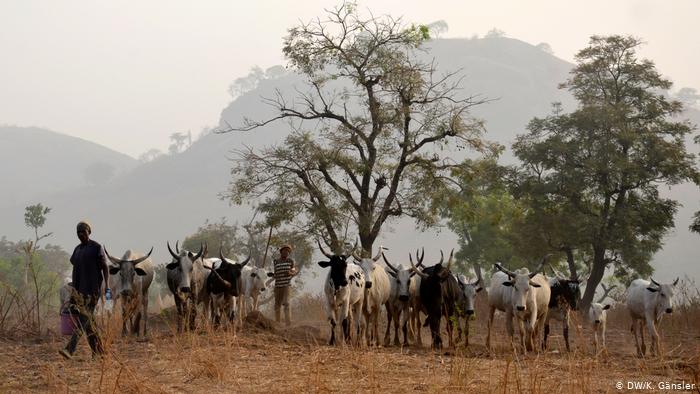 THE Deputy President General of Ifite Ogwari Community in Ayamelum local government area of Anambra State, Chief Nwaora Ikeoala and the town’s chief security officer, Chief Michael Akamala have been detained at the Anambra State Police headquarters in Awka over the alleged killing of three herdsmen and some cows after the destruction of cultivated large farmlands in the area by Fulani herdsmen. But the two community leaders, who spoke from their detention at the Special Investigation Bureau, SIB, Awka, on Sunday insisted that they never killed anybody, even as they admitted meeting after an attack on their farms to access the level of damage to crops by the herdsmen in line with the directive of the state government’s special security task force on farmers- herdsmen relationship in the state.

The state Deputy Commissioner of Police, Mr. Baba Maiyaki, who also spoke with reporters, said three herdsmen lost their lives, but only one body was recovered, adding that it was the reason the community leaders were being detained, while investigation into the matter was continuing. It was gathered that the community leaders were arrested shortly after they held a meeting with Governor Willie Obiano, who was said to be worried about the increasing level of insecurity in the area. Narrating their ordeal, the Deputy PG for Ifite Ogwari said: “We were in a meeting to access the damage done on our farms by the herdsmen when the Divisional Police Officer for our area called me and demanded to see us. When we went, he took us to many places and ended up at a mortuary at Adani but we did not see any dead body. Since then, we have been in detention without knowing what our offence was.” He said his community was living peacefully with the herdsmen until the recent incident following the alleged invasion of the area by another set of herdsmen. A nongovernmental organization, the Igbo Mandate Congress, which had intervened in the matter, claimed that it was the leadership of Miyetti Allah Cattle Breeders Association of Nigeria MACBAN, in the South East that alleged that youths of Ifite-Ogwari killed some herders and 108 cows between December 20, 2019 and January 27, 2020. Director General of Igbo Mandate Congress, Reverend Obinna Akukwe said the organization has been following up the issue since Miyetti Allah leaders raised the alarm last week, adding that a preliminary report had already been sent to Ohanaeze Ndigbo, the Christian Association of Nigeria, CAN, and members of the diplomatic community on the situation at Ifite-Ogwari, which, according to him, was capable of turning Anambra State into a theatre of war. He said: “The community leaders of Ifite-Ogwari are being detained at the insistence of leaders of Miyetti Allah in the South East. The police justified their incarceration on the mantra that they are still investigating and looking for the killers of the herdsmen and the 108 cows.

According to reports, The legal adviser to the community, Mr. Michael Chukwuemeka, has been denied proper access to the detained elders and the Deputy President General is in bad state of health. Top officials of Anambra State government told IMC that Governor Obiano recently asked the Commissioner of Police to release the elders, but the Police declined, insisting that only order from Abuja can guarantee their release. The elders and youths of Ifite-Ogwari had made repeated efforts to get the attention of the state government to the tension, and they were repeatedly told to forgive their enemies for the sake of national unity. They claimed that at no point between December and January did the youth mobilize against the Fulani.” If anybody ever died, as claimed by Miyetti Allah, it could be as a result of a private clash between an infuriated farmer and herdsman, and the community was not involved in it. Igbo Mandate Congress advises Governor Obiano to stop taxing the Ifite Ogwari community, and pay from state coffers the N38 million the Miyetti Allah demanded for the allegedly killed 108 cows. The governor should also pay N18 million for the destroyed farmlands and N18 million for rehabilitation of families whose daughters and mothers have been senselessly raped since the state failed to protect the community after repeated alarms. It also urged the police to order the release of the community leaders and pay them compensation for what the groups described as illegal detention, even as it advised the youths of Ifite Ogwari to suspend any planned reaction and allow a solution to be worked out by concerned Igbo leaders.