30 killed as bomb detonates in a crowded bridge in Borno 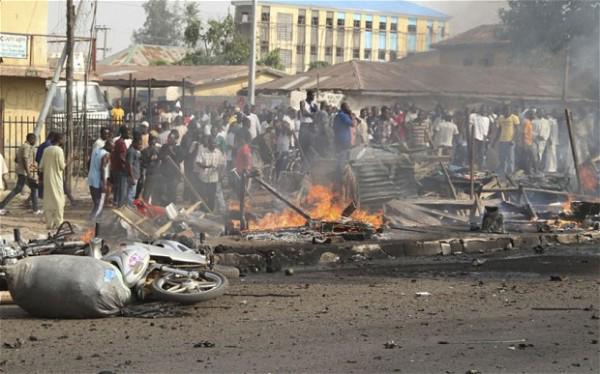 According to reports, There are indications that not less than 30 people have lost their lives in Borno after an improvised explosive device detonated on a bridge in Borno state on Monday, January 6. According Reuters, the bomb detonated at roughly 5 p.m. local time (1600 GMT) on a crowded bridge in the market town of Gamboru that leads into neighboring Cameroon. The news outlet, quoting witnesses in the market town, claimed that more than 35 injured people were taken to the local hospital following the attack. "It is an unfortunate day for us to witness this frustrating and devastating incident in our community. I just heard a loud sound of explosion, before I realized what was happening, I saw that many of our friends and colleagues have being killed,"eyewitness Modu Ali Said said. Meanwhile it had being previously reported that the Nigerian Army said that Boko Haram and Islamic State West Africa Province terrorists are being subdued due to the efforts of troops in the Operation Lafiya Dole. Colonel Aminu Iliyasu, the Nigerian Army operations media coordinator, who revealed this on Wednesday, November 27, said that troops defeated three top terrorists after engaging them at Sabon Gari which is close to Sambisa forest, The Nation reports. Iliyasu said that the victorious soldiers recovered from the insurgents, items such as 81 rounds of 7.62mm Special ammunition, food items and 7 bicycles. He addded: "...troops of 25 Task Force Brigade deployed at Damboa swiftly responded to a distress call by some residents of Grijan Village along Damboa – Chibok road. “The Boko Haram criminals who were sighted massing up to attack the Village were pursued by troops."