After heart attack, Sanders battle to remain in presidential race. 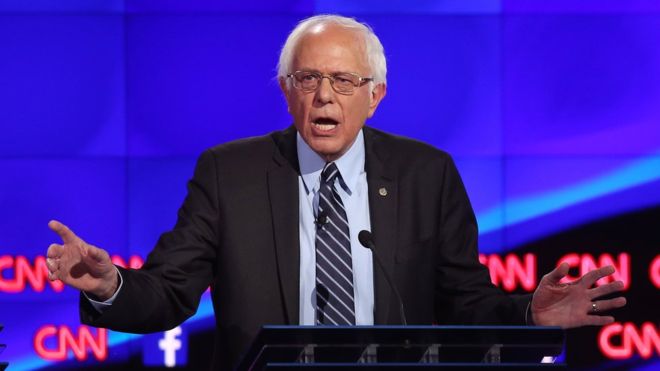 With all campaign events canceled after an unexpected heart surgery and nothing scheduled until Tuesday’s Democratic presidential debate, Bernie Sanders’ campaign has been seeking to reassure supporters the 78-year-old senator is still a viable presidential pick.
The campaign has blasted the press with policy announcements and attempted to pivot the health scare to a message about his signature Medicare for All policy. His campaign is going forward with a $1.3 million TV ad buy in Iowa, the crucial early voting state that will kick off the Democratic primary contest in February. Sanders cleared his previously frenetic campaign schedule after a heart attack on Oct. 1 at a time when his candidacy has already been eclipsed by fellow liberal Elizabeth Warren’s ascent as a chief contender to early front-runner Joe Biden, who is 76. At 78, Sanders is the oldest of the 19 Democrats seeking the party’s nomination to take on Republican President Donald Trump, 73, in the November 2020 election. That question starts to creep into people’s minds in terms of, ‘Is this guy going to be around for eight years after the election?’” said Bret Nilles, Democratic chair of Iowa’s Linn County. Sanders, who has been recovering at his home in Burlington, Vermont, since his heart attack, will hold a “Bernie’s Back” rally at Queensbridge Park in New York on Oct. 19, his first rally in nearly three weeks. On Tuesday, he will appear alongside 11 other Democratic candidates who qualified for the fourth primary debate in Ohio, when voters in Iowa will be watching Sanders’ performance closely, Nilles said. A raft of TV ads – postponed for several days when Sanders was hospitalized – began airing on Oct. 8 in Iowa, at a cost of $1.3 million, underscoring the campaign’s spending power after raising more cash than any other candidate in the third quarter.
Phone volunteers made about 800,000 calls to early voting states including Iowa in the four days after Sanders health scare was reported, campaign officials said. The rest of the campaign and the volunteers took it upon themselves to double down on their effort and their energy,” said Sanders’ campaign manager Faiz Shakir. They really said, ‘Senator Sanders, we’ve got you on this’.” The response was a sign of the passion his loyal supporters feel for the democratic socialist’s agenda of reorienting the U.S. economy against corporate power and tackling rising inequality with measures like expanding government-run healthcare. But doubts over his health could make it more challenging to pick up new supporters. Many national polls in recent weeks have already shown U.S. Senator Warren of Massachusetts, who is 70, pulling ahead of Sanders into second place behind Biden. Shakir, the campaign manager, said Sanders would show during Tuesday’s debate he was “on the path to a full recovery”. Some had been writing off Sanders’ campaign from the start, ignoring the large numbers of people donating to and volunteering for the campaign, he said.