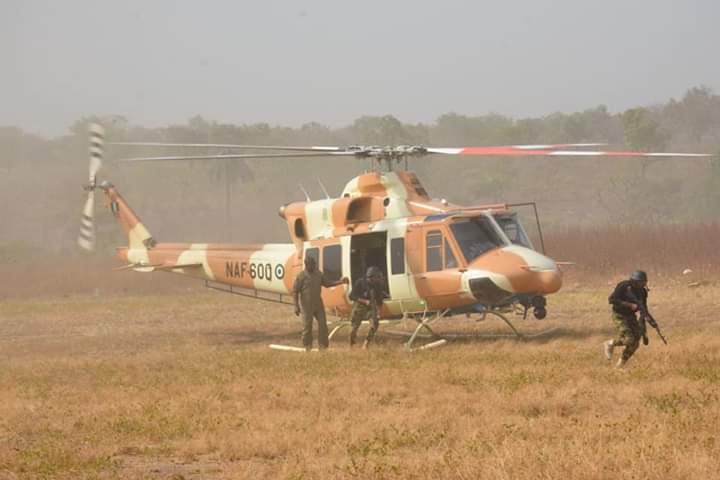 Nigerian Air Force said its troops of 271 detachment stationed in Birnin Gwari, Kaduna State to fight banditry and other forms of prevailing crimes have killed 12 armed bandits and rescued 15 kidnapped victims.
A statement released on Tuesday by the NAF spokesman, Air Commodore Ibikunle Daramola noted that, the successes were recorded in an air strikes conducted by the Air Task Force of Operation DIRAN MIKIYA in conjunction with surface forces. The statement read, the establishment of the 271 Nigerian Air Force (NAF) Detachment in Birnin Gwari is yielding steady dividends as air strikes conducted by the Air Task Force (ATF) of Operation DIRAN MIKIYA on 10 May 2019, in liaison with troops of the detachment, have resulted in the neutralization of 12 armed bandits as well as the release of 15 kidnap victims. The air strikes, which were conducted on the heels of intelligence reports indicating that the armed bandits were camped within the Kamuku Forest area, straddling both Birnin Gwari Local Government Area (LGA) of Kaduna State and Sabuwa LGA of Katsina State, caused the bandits to flee the location in disarray thereby enabling the kidnap victims to escape, with some finding their way to Nacibi, and others to Gobirawa and Dogon Muazu in Birnin Gwari LGA. Air Commodore Daramola assured that, Nigerian Air Force was working in consonance with surface forces and other security agencies, will sustain its operations to flush the bandits out of the Northwest region of the country.