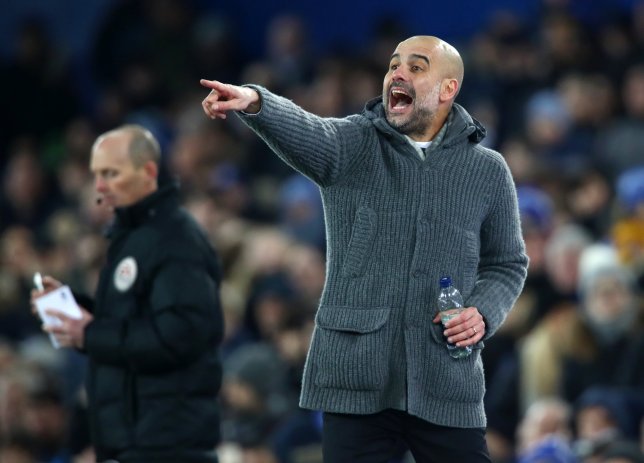 Manchester City boss, Pep Guardiola has warned his side against being carried away by their 2-0 victory against Manchester United. Guardiola told his players to quickly forget about their derby day success at Old Trafford. City beat United 2-0 with goals from Bernardo Silva and Leroy Sane to leapfrog Liverpool to go top.
Guardiola said his side cannot enjoy it as much as they could have done in the depths of winter because the title race remains so close. City face Burnley on Sunday and Guardiola told his players to focus on the visit to Turf Moor rather than celebrating their derby joy too hard. It’s in our hands, Liverpool is not going to drop too much points, but it’s in our hands, with three games it’s like this,” Guardiola told Sky Sports. We’ve won the last 11, it’s incredible what these players have done so far but we still have a job to do. If this victory happened in November, December or January then we celebrate more. Maybe tonight we can enjoy it, but then tomorrow it’s done, we have to focus.
I know the people will talk about how beautiful we are, how handsome we are. Now we have to go to Burnley, my two seasons there are so tough, with [Chris] Wood, [Ashley] Barnes, [Dwight] McNeil is an incredible player,we have to be focused, Burnley is always a tough game to play. We’re fortunate it’s in our hands, so it depends on our performances, if we win three games we’re champions and that’s what we’re going to try to do. On their win at Old Trafford, he added, “No. It was tough, when we lose it’s a disaster when we win it’s easy, but it doesn’t work like that at this level,” he said. First half was difficult, that is normal, we feel the pressure, we need the points to win the Premier League, second half we were relaxed, we realised we had to win the game. The first action from Bernardo we attacked, the second half was so good the way we played and faced this kind of game.