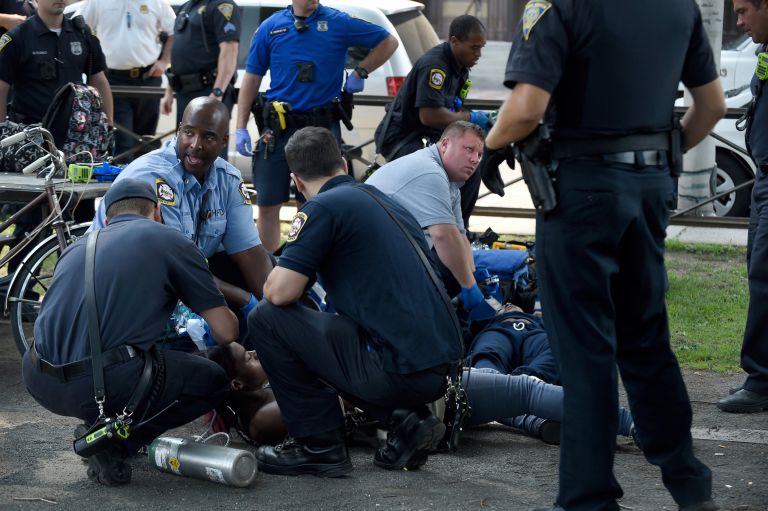 Nearly 80 people have collapsed in or near a park in the U.S. after suffering overdoses from a batch of synthetic marijuana.

People were seen dropping to the ground unconscious, vomiting and becoming lethargic as they fell ill in New Haven, Connecticut.

As well as paramedics and police, social workers and mental health professionals were sent to New Haven Green, which is right next to Yale University.

Authorities described there chaotic scenes as 76 people collapsed on Wednesday and another 17 fell ill yesterday.

However, officials are not sure whether Thursday's overdoses involved the same batch of ‘K2' synthetic marijuana. No deaths were reported, and most of those brought to local hospitals have been discharged, although some were said to be in a critical condition.

Synthetic marijuana, called ‘spice' and other names, usually is plant material sprayed with chemicals or other substances that is sold in small, colourful packets. It has been blamed for other mass overdoses across the country. In May, more than 50 people in Brooklyn, New York, overdosed on K2, none fatally.
Some of the New Haven victims tested positive for the powerful opioid fentanyl, also blamed for overdoses, but authorities believe this week's overdoses were caused solely by synthetic marijuana.

Police Chief Anthony Campbell said one of three people arrested in connection with the overdoses apparently gave K2 away for free in an effort to get people hooked. The names of the suspects haven't been released.

Campbell said New Haven provides an array of services to people addicted to drugs, many of whom come from other towns where such treatment programs aren't available.

‘New Haven is a place where we really are trying to help people,' Campbell said. ‘Someone … with malice in their heart took advantage of that, took advantage of this vulnerable population. But that will not stop this city from reaching its hand out to those who are in need and treating them and providing those services.'

The 16-acre Green, which the National Park Service says dates back to 1638 and is one of the oldest in New England, is a focal point of downtown New Haven.

It's surrounded by parts of Yale University, shops, churches and government buildings, and serves as a hub for area bus service.

Campbell also said officers were executing search warrants Thursday in an effort to get all the bad drugs off the streets. He said that in addition to state charges, the suspects could also face federal charges.