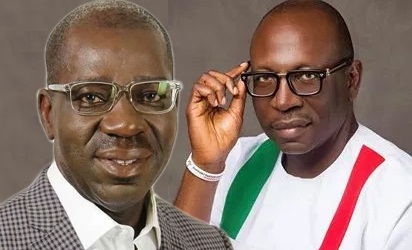 Un-authenticated early results from some wards after Wednesday's Governorship election in Edo State show that the candidate of the All Progressives Congress, Mr. Godwin Obaseki, and the standard bearer of the Peoples Democratic Party, Pastor Osagie Ize-Iyamu, are locked in a close race.
Though the Independent National Electoral Commission, INEC, had yet to authenticate the results, they appeared to indicate that the two candidates were running neck and neck in the poll.
However, both the APC and PDP are claiming to be ahead in the polls, while also accusing each other of rigging.
In the Esan North-East Local Government Area where a former Chairman of the BoT of the PDP, Chief Tony Anenih, hails from, unconfirmed results showed that the PDP won seven out of the eight units in Ward 3, while the APC won just one unit.
The APC also lost in the polling unit of the National Chairman of the party, Chief John Odigie-Oyegun, where the PDP emerged victorious.
Hpwever, the APC won in Ward 7 in the Oredo Local Government Area of the state.
The APC scored 4,412 votes while the PDP got 4,047 votes.
In the same vein, the governorship candidate of the PDP in the 2012 election in the state, Maj. Gen. Charles Airhiavbere (retd.), who is now a stalwart of the APC, led the ruling party to beat the PDP in Unit 18, 19, 20 and 21 of Ward one in the Oredo LGA.
In Unit 18, PDP got 158 while the APC got 259. In Unit 19, APC scored 146 and PDP polled 85.
In Unit 20, the APC got 259 votes while the PDP polled 208 votes and in Unit 21, the APC scored 128 votes leaving the PDP with 98 votes.
In Oredo Ward 12, out of the accredited 4,399 voters, the PDP took the lead with 2,066, leaving the APC with 2,041.
In Oredo Ward 4, out of the total accredited voters of 4,911, the APC scored 3,058 while the PDP polled 1,541.

Edo Polls: I will win by 75percent- Obaseki
Leave a comment...
All news