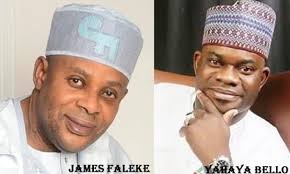 The appeal court sitting in Abuja has dismissed an application by James Faleke, running mate to late Abubakar Audu in the 2015 Kogi governorship election, to nullify the installation of Yahaya Bello of the All Progressives Congress (APC) as governor of the state.

Bello was nominated by the APC to replace the late Audu following his death.

Faleke had argued that the votes polled by the party in the election were his, since he was a joint candidate to Audu.

But in his ruling, Justice Jummai Sankey noted that according to Section 221 of the Nigerian constitution, only the party could canvass for votes.

She explained that the constitution does not recognise independent candidature, so Faleke could not lay claims to the number of votes polled before the demise of Audu and before the election was concluded.

"So it may be said that he is not a candidate,"Ø Sankey said.

The judge also held that Faleke was only joined to Audu after the primaries had been concluded, but Bello, whom the APC chose, participated in the primary election that produced Audu as candidate.

Sankey also added that the nomination of Bello to replace the late Audu did not contravene the constitution or the electoral act.

In June, the election petition tribunal dismissed Faleke's bid to topple Bello, holding that Faleke could not be declared governor because he did not participate in the APC primary.

Halima Mohammed, justice of the tribunal who delivered the judgment, "Äheld that Faleke was not nominated by the APC as its substantive candidate in the governorship election.

"ÄShe stated that the APC was right to have nominated Bello to replace the late Audu as its candidate in the December 2015 supplementary election."Ä

However, Mohammed held that Faleke remained the valid deputy governor of the state because there was no evidence to show that he wrote to his party withdrawing his candidature as deputy governor, as required by law."Ä

"It's Not Over" - Atiku Reacts As Supreme Court Dismisses Adeleke's Appeal
Leave a comment...
All news