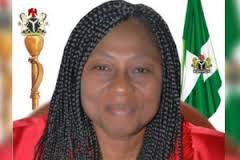 After barely two months in office, Mrs Elizabeth Ativie stepped down on Monday, as Speaker of the Edo State House of Assembly.
She has now been replaced by the former Deputy Speaker, Dr. Justin Okonoboh.
A motion was moved by the Majority Leader, Folly Ogedengbe, under matters of urgent public importance, for a change in the leadership of the House; after which, Ativie stepped down.
Ogedengbe explained that in order to ensure fairness in the political system, all three senatorial districts had to be adequately represented. As such, the change was necessary.
Since the Edo State Governor, Adams Oshiomhole, hails from Edo North senatorial district while his deputy, Dr. Pius Odubu, and Ativie hail from Edo South, they needed someone from Edo Central senatorial district to take over the Speakership.
Dr. Okonoboh represents Igueben constituency in Edo Central senatorial district; hence, he has now become Speaker.
Mrs. Ativie would therefore become his Deputy.
Ogedengbe said:"I am going to move that there is a change of leadership in the House in order that this state moves forward, that there will be fairness and equity in the system, that the three senatorial districts will be properly accommodated. I am going to move with a heavy heart.
"I move therefore, that the Speaker of the Edo State House of Assembly, Mrs. Elizabeth Ativie, should step down and assume office as Deputy Speaker of the Edo State House of Assembly; and that the Deputy Speaker, Dr. Justin Okonoboh, be promoted as the new Speaker."Ä"Ø
While accepting her fate, Ativie commended the lawmakers for giving her the opportunity to serve, and urged them to accord same to her successor.
She said:"Although this is a huge a difficult sacrifice to make, I believe that it should be done for the sake of the people of Edo state. No sacrifice will be too big to pay in meeting the yearning aspirations of or people, who elected us to this House"Ä.
Today, I bury my pride and my ambition for the general good of the people and the state, through which I emerged as a legislator."Ø
On his part, the new Speaker commended Ativie for her willingness to step down in a manner unprecedented in the entire country, vowing that all her appointments would remain"Ä valid.
Ativie was appointed as Speaker on May 3, after her predecessor was impeached. She now becomes Deputy Speaker of the Edo State House of Assembly.