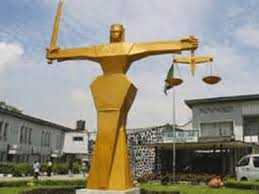 Wild jubilation broke out at the premises of the Court of Appeal in Lagos State on Thursday, when the right to wear Hijab, Islamic headscarf, in public primary and secondary schools was granted.
With the ruling, Muslim students in Lagos State public schools now have the right to wear Hijab on their school uniforms, both within and outside their school premises.
Muslim faithful were seen  shouting æAllahu Akbar', æAlihamdulilah', meaning Allah is the greatest and all thanks is due to Allah, respectively, when the judgment was delivered.
However, the Lagos State Government, in a swift reaction, said it is still studying the judgement.
Lagos State Commissioner for Information, Mr Steve Ayorinde, said: "The position of the Lagos State Government is that we have to study the judgement and the reason behind it. We are all aware that Lagos State and indeed the entire country is a secular state as prescribed by the Constitution  and that issues of religion must always be approached with great caution, especially in multi-religious state like Lagos. So, we need to exercise restraint before our next line of action."Ø
An initial ruling by the Lagos State High Court had disallowed the use of hijabs in state public schools; but in delivering judgment yesterday, the Justices of the Appeal Court set aside that initial ruling from the High Court.
In his reaction, the Counsel to the appellant students, Mr Mohammed Lawal, said the verdict was a victory of truth over falsehood.
On the position of law as enunciated by the Court of Appeal, Lawal said: "The constitution of Nigeria recognises multi-religion state, not secular; so whenever any of our religious rights is being infringed upon, we need to demand for our right and that is what we have done.
"The state has said in its policy statement that Hijab is only allowed during Islamic activities, however with the position of the judgement today (Thursday), things have changed. The court stated that the state was not able to show which policy it stated contradicted the usage of Hijab in public schools and that where such policy exist, it cannot override the provision of the constitution, which allows the appellants to practice their faith.
"Any student harassed by any teacher or principal can take this up because if such thing happens, that is a contempt of the court."Ø

Jubilation In Sudan As Military Chief Steps Down