There was drama on social media a few days ago between some popular faces in the Nigerian movie industry identified as Doris Ogala, Uche Elendu and Oge Okoye. The drama started after Ogala took to social media with claims that her colleagues, Okoye and Elendu, are husband snatchers and as such, people should flee from them. In addition to her claims, the movie star also accused Okoye of having an affair with Elendu’s ex-hubby. Days after the drama had played out on social media, Ogala returned on Sunday, February 2, with some chat evidence and new allegations against her colleagues. In the new screenshots released by Ogala, Uche Elendu was accused of pimping out pregnant ladies to men for money. An unidentified user in the chat screenshots claimed that Elendu spiked the drink of one lady identified as Emili and eventually pimped her out to a man whose identity was not disclosed. According to the user in the chat, Elendu’s friend, actress Okoye, is also aware of what she has been getting up to as it regards pimping out ladies.

Check out the screenshot below: 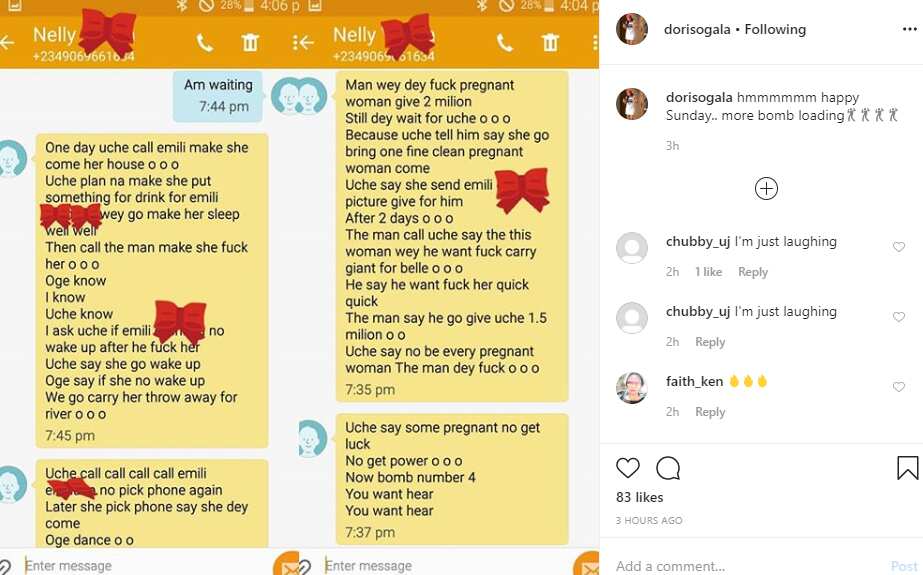 My husband rapes me – Nollywood actress opens up
Leave a comment...
All news