A miracle has occurred in the city of Port Elizabeth, South Africa, after a 26-year-old survived a horrible car accident. The unidentified woman was said to have been in her car when the truck landed on top of her car out of nowhere.
According to reports, It was gathered that the truck had rolled down a hill and landed directly on her car trapping her inside it. The horrible incident had occurred around 2:00pm on Tuesday, November 26. The young woman was said to have been trapped in the vehicle for almost 40 minutes before she was rescued. According to Afri-Update, the truck's brake allegedly stopped working after it was parked by the driver, who came to pick up his kids from a school in the area. Police spokesperson Sandra Janse van Rensburg said: "When he returned to his truck, he noticed it was no longer parked where he had left it. He then noticed that the truck had rolled forward and collided with an Opel Adam that was travelling in Diaz Road, towards CJ Langenhoven Drive. The 26-year-old was said to have survived with some injuries after she was cut out of the car by fire and rescue services. It was gathered that she was immediately placed on advanced life-support intervention before being rushed to the hospital. According to report, the truck driver is under investigation for reckless driving. 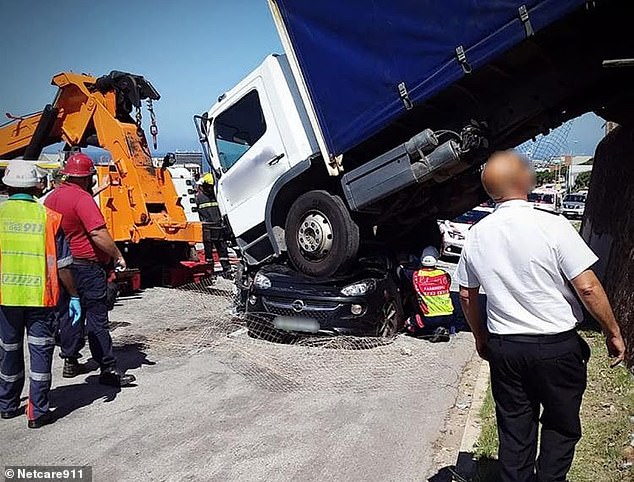