The brutal gang rape and murder of an eight-year old girl has sparked outrage and anger across India.

The body of Asifa Bano, who belonged to a Muslim nomadic tribe, was found in a forest on 17 January near Kathua city of Indian-administered Kashmir.

The story made headlines this week when Hindu right-wing groups protested over the arrest of eight Hindu men.

The
case has become a religious flashpoint in an already polarised Indian region.

The men the police have arrested include a retired government official, four police officers and a minor - all of them belong to a local Hindu community that has been involved in a land dispute with the Muslim nomads.

Outrage grew after two ministers from the Hindu nationalist Bharatiya Janata Party (BJP) attended a rally in support of the accused men. 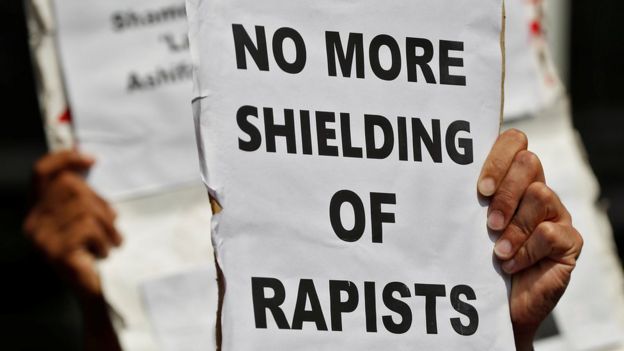 The crime took place in one of India's most restive regions. Since 1989, there has been an armed revolt in the Muslim-majority Kashmir valley against Indian rule - they valley is adjacent to Hindu-majority Jammu.

Asifa's family belongs to a community of Muslim nomadic shepherds who crisscross the Himalayas with their livestock. In the winter, they often travel from the valley to Jammu, where they use public forest land for grazing - this has recently brought them into conflict with some Hindu residents in the region.

Investigators believe that the accused men wished to force the nomads out of Jammu. After they were arrested, lawyers in Jammu city tried to stop police entering the court to file a charge sheet.

The lawyers were believed to be supporting a Hindu right-wing group that has alleged that the accused men are innocent, and have demanded that the case be transferred to India's federal police.
Protests to continue

Rahul Gandhi, the chief of the main opposition Congress party, led a candlelight march in Delhi on Thursday night.

More protests have been planned to bring attention to brutal crimes against women in India.

The chief of Delhi Commission for Women, Swati Maliwal, has said she will be starting an indefinite fast from Friday to demand better security for women and children in the country.

Several other activists and women have also planned protests in Delhi and other parts of the country over the weekend.

Some people have also used the hashtag #Unnao to highlight another rape case in which a lawmaker is accused of raping a 16-year-old in the northern state of Uttar Pradesh.

Kuldeep Singh Sengar, 50, from the ruling BJP allegedly raped the girl last year in Unnao district. But her case was registered only after she tried to kill herself last week in front of the chief minister's home.